Our fist appointment Saturday in was with Maria Emília Campos at Churchill’s. Churchill’s is a relative new company, but founded by a family with a long tradition in Port. The founder and wine maker is John Graham from the family that owned Graham’s until they sold it to Symington Family Estates in 1981 he established the new company, Churchill Graham Lda and used his wife’s name for the brand. Since then the reputation for high quality Port and table wines has been growing. In 1999 they bought Quinta da Gricha on the south bank of the Douro, between Pinhão and Tua. 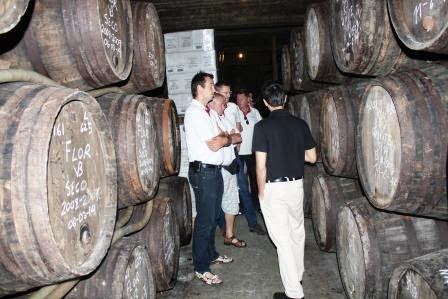 Back in 2011 I attended a tasting of their Vintage Ports in and this spring I paid the house a short visit in Gaia. Here in June we had a tour around the lodge and then a tasting prepared and commented by Maria Campos, the company’s director.
We started with some of their very nice table wines:
Estates Branco 2012: Mostly based on Rabigato and then some Viosinho and old vineyards. Fresh with nice acidity, a good body with citrus and minerals.
Estates Douro 2011: A blend of Touriga Nacional, Touriga Franca and Tinta Roriz. Beautiful, deep red. Cherries and other red fruit and notes from the oak, soft tannins, dry and with nice minerality.
Touriga Nacional 2008: More maturity and complexity and a bit rougher, green in the nose, a long finish. More rough than the blend. 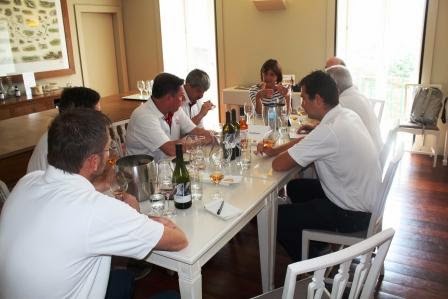 Then we continued with Port:
Dry White Aperitif: 10 years old, a blend of Malvasia Fina and other white grape varieties. Looking orange and golden, a bit hidden in the nose. Soft, fresh and dry. Some almonds and mandarin, and a nice finish with pepper. Very useful as an aperitif.
LBV 2007: 4 years on cask, unfiltered. Nice ruby red, but a bit unclear. Great fruitiness, black berries, dry.
10 years Tawny: More red than brown and more fruit than notes from the cask. Dried fruit and orange. Some oxidation.
20 years Tawny: A lovely and impressive glass of tawny. More character and flavour from the cask. Soft and smooth in the mouth, almonds and a long, nice finish.
Vintage 2011: Young, dark and purple with fresh raw fruit and blackcurrant. Dry and with tannins for the long term. Good potential for aging.


Tasting both wine and Port and among the latter both Tawny and Vintage it is obvious that John Graham and Churchill’s have managed to create their own style with fruit, dryness and minerality. 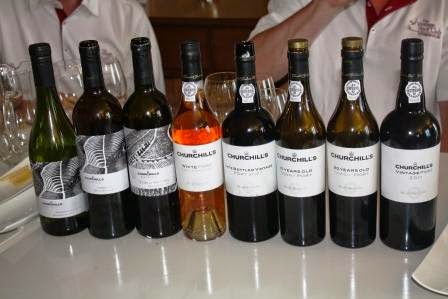