If you have been travelling in , you know that the beautiful landscape and all the tempting vineyards start just outside . Driving south you are in Chianti DOCG, which is divided into several sub regions. Just before entering the most famous part, Chianti Classico, you can find the old estate La Querce in Chianti Colli Fiorentina. 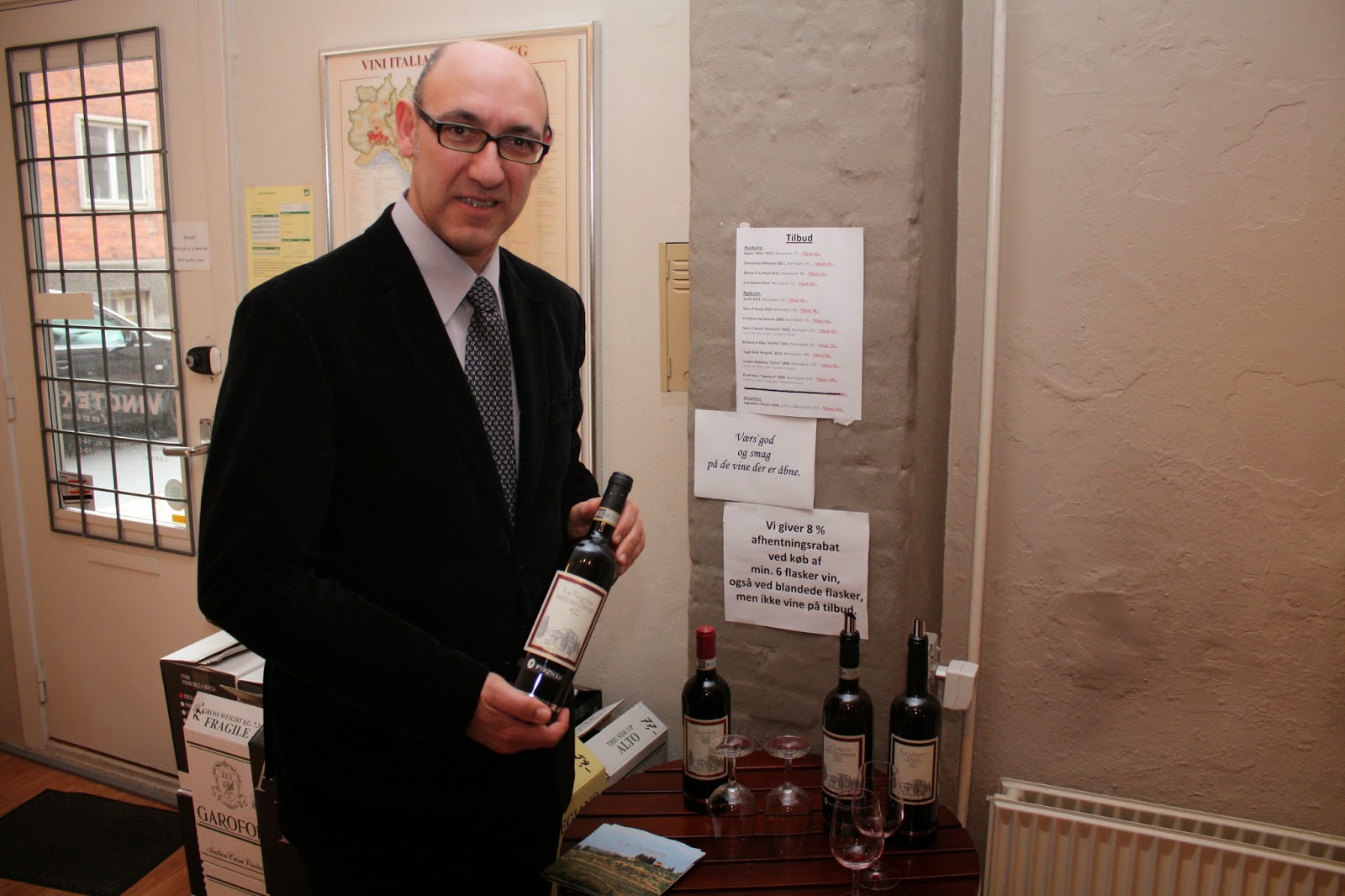 Last week the winemaker from La Querce, Marco Ferretti, visited Odense, where he took part in a winemakers dinner and a tasting at Vinotek A Fynnis. I met Marco Ferretti and tasted three of his wines.
But first a few word about the estate. La Querce dates back to 14th century and the oldest document mentioning wine production is from 1518.  The name refers to an old oak three that used to be growing on the estate, which is big of which about are vineyards, mostly facing south. In 1962 the estate was bought by Gino Marchi, who invested money in renovating the place. Today it is owned by his son Massimo Marchi and managed by Marco Ferretti. Besides wine the estate produces olive oil and Grappa. The total production of wine is 35.000 bottles a year of which 75-80 % are exported, mainly to and .
Marco Ferretti told me, that his aim is to produce wine after the ”Sangiovese philosophy” with a good balance between the fruitiness from the grapes and notes from the oak. The three wines I tried were: 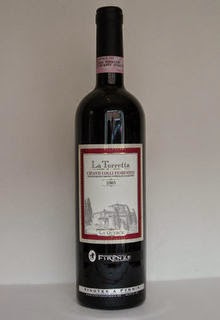 Sorrettole Chianti DOCG: Made of 80 % Sangiovese, 10 % Colorino and 10 % Merlot, matured in stainless steel. The entry level is straightforward Chianti with fruit and cherries in the nose. Fresh fruit on the palate, dry and with soft tannins.
Fiorentini DOCG: Made of 90 % Sangiovese, 5 % Canaiolo and 5 % Merlot, aged 14 months in French barriques. Dark rubin, cherries and notes from the barriques in the nose. On the palate good balance between mature fruit and darker notes like vanilla, toast and coffee. A good structure and very easy to drink.
IGT: Made of 95 % Sangiovese and 5 % Colorino, aged 18 months in French barriques. Dark ruby with a great nose of red fruit and berries, spices and vanilla notes. Soft tannins and a more complex structure with mature fruit and spices and a long tail.
The time in barriques was distinct in the last two wines, but they were not overoaked and the fresh fruit and the typical Sangiovese taste was still present. And that is how it shall be in my opinion.
Besides these three wines La Querce produces a Toscana Rosso IGT based on 100 % Merlot and a sweet Passito called Dama Rosa based on 100 % Canaiolo.

The taste of memories

Some months ago I was invited to the Danish release of Ne Oublie – the old from Symington Family Estates and Graham’s. My article about the Port is now published in the Danish magazine Vinbladet. Here I will just share some thoughts and off course my tasting notes.
Two things came to my mind during the presentation, which took place in in .  First of all it was matter of storytelling more than just a tasting of a very good old Port from 1882. Secondly especially the short film, that has been produced to promote Ne Oublie, gave me an impression of what the Portuguese call saudade. The word can’t be translated with just one word, but it is connected to emotions like sadness, longing, nostalgia and melancholy – emotions that you will find in Fado music as well. In the film the Symington’s are talking quietly about the Port, its history and their family through generations, and the pictures and sound includes beautiful details like dripping water, ringing bells and chirping birds, The sun above the vineyards, the floating river and old gates. It is a tale about a time and a place long away from the modern world, a tale of memories and heritage.
Off course the release of the Port itself is neither sad nor nostalgic. The Symington’s decided to share one barrel out of three remaining with Port lovers who are invited like me or can effort to buy a bottle. But when you taste and drink the Port, you are not just drinking a special and very good wood-aged Port. Due to the whole storytelling you feel that you are sharing the family’s history and sipping down a tiny bit of their heritage. 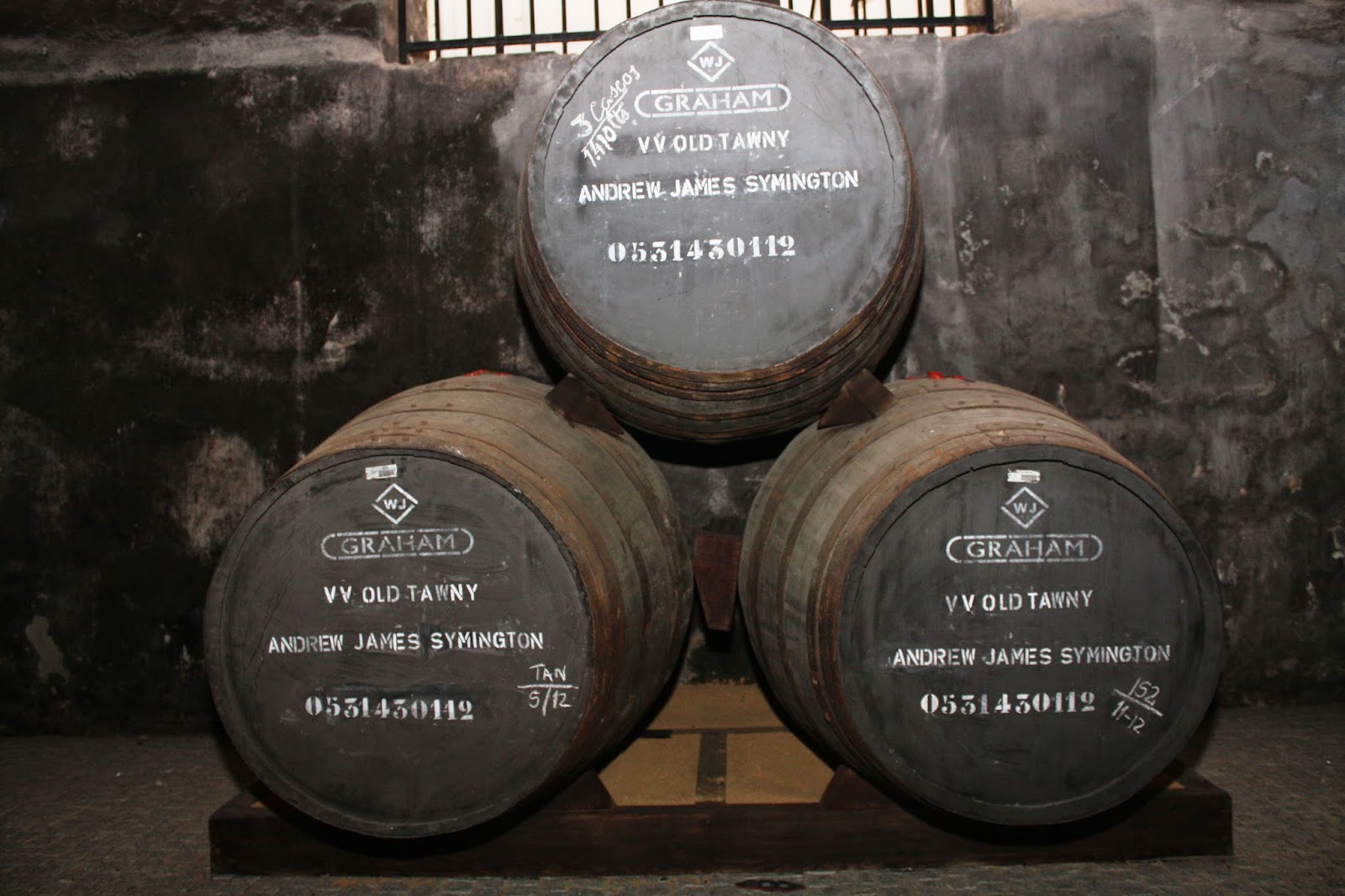 The story of Ne Oublie is, that Andrew James Symington - the first from the family to settle in – in 1924 decided to buy four barrels of Port from 1882 – the year he arrived and started to work for Graham’s. The barrels has been stored in Gaia ever since, but one has been used to tip the other three up and off course for tasting now and then. The present generation decided to bottle one barrel and release 656 very exclusive bottles of Ne Oublie including a handmade crystal decanter from , engraved silver rings from and a special designed and handmade leather box from .
“It is a family jewel, so the whole presentation had to be special too. At first we considered to release it as a , but then we chose Graham’s. That is where the story starts and now it is full circle”, Dominic Symington said during the tasting.
Dominic told me, that the decision to bottle one cask was made, because other companies are releasing some very old wood-aged Port as well. The cask was not official documented by IVDP, which is the reason why it is not called a Colheita from 1882. 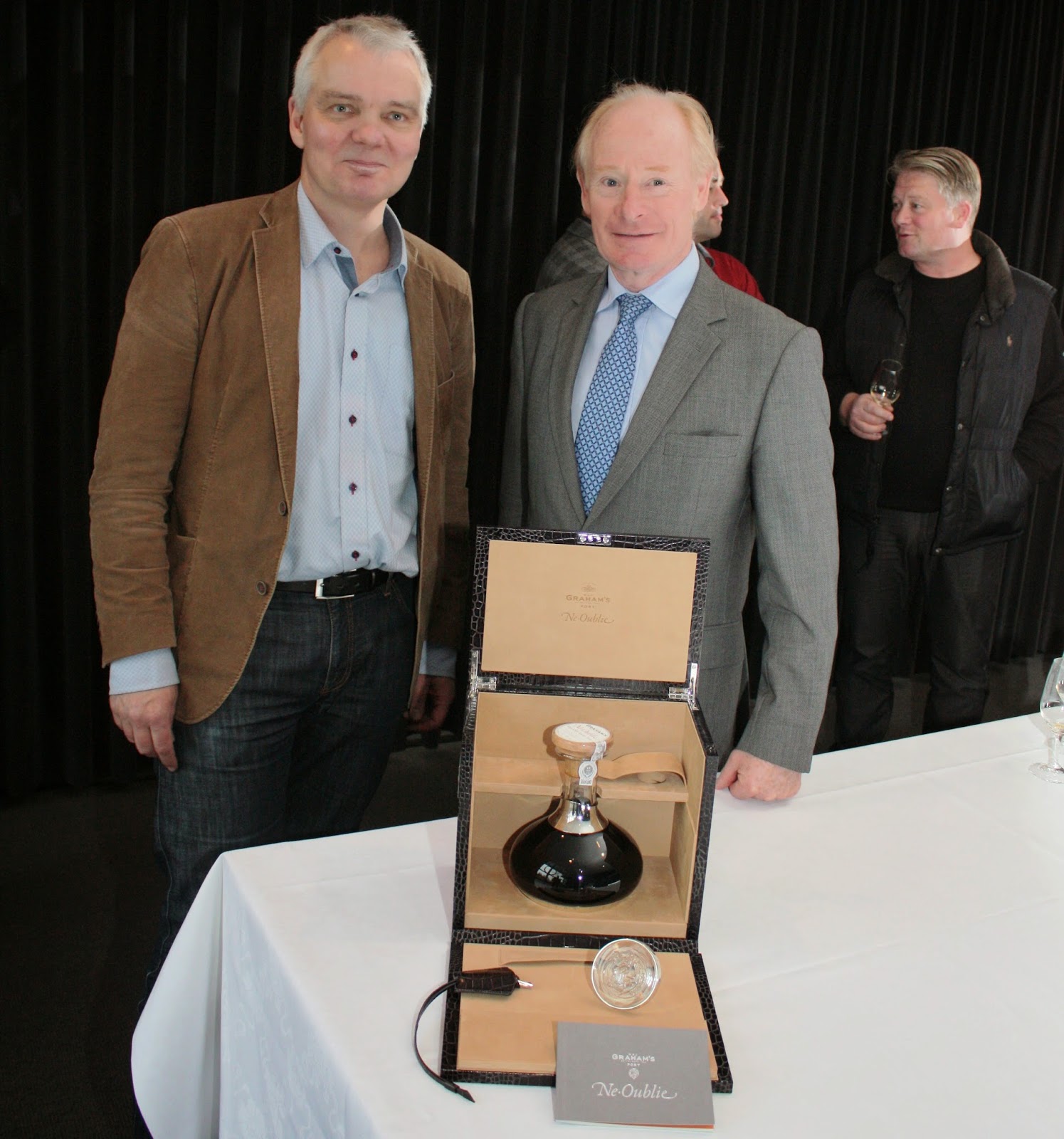 But who needs documents when the story is good and the wine excellent. It is very dark brown, balsamic, with an orange rim. Very expressive in the nose with dried fruit, almonds, prunes and again balsamic notes. In the mouth it was fat and full-bodied, soft and creamy, very concentrated on the palate with notes of orange, figs, honey and almonds. All in all it is a very complex and surprisingly fresh Port with an impressive acidity to balance the sweetness. And it ends of couse with a very long and intense tail. A wine to remember.