Passion for Wine and Culture


My approach to wine and wine tasting is sort of semi-professional. First of all I am an amateur. I enjoy drinking wine, but I am not educated as a sommelier or working in the wine business. Tasting and writing notes is not my full time job. By the way, if you think about the origin of the word amateur it comes from the Latin “amara”, meaning love. An amateur love what he or she is doing. And I am not afraid to admit, that I love tasting and drinking wine. Wine is a passion for me.
On the other hand I am a journalist, and among other things I do write about wine. It has not been like that for many years, but slowly my interest increased. I have been doing radio programs about wine, I have written articles about wine for newspapers and magazines, and I have a couple of blogs where wine is among the topics – this one in English and another one in Danish called “Portugal – my second homeland” (http://mit2hjemland.blogspot.dk/) about Portuguese history, culture and wine.
Of course wine is far from being the only topic I deal with as a journalist. And I guess that my approach to writing about wine is based on the fact, that I have been a cultural journalist for many years. I like history, I like art, I like literature etc. Because of that I am interested in the stories and the history behind a wine. 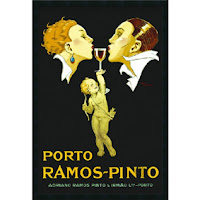 Too give an example; I can mention that Ramos Pinto is my favourite port brand. They are making splendid port – good vintages and very good tawny with indication of age. But that is not the only reason. The Company has two main interests: winemaking and culture. They are having museums in both Vila Nova de Gaia and at Quinta de Ervamoira. And the founder of the Company, Adriano Ramos Pinto, was interested in art and public relation, so he ordered international artists to create advertising posters – like “The Kiss”. You can read more about it in an article I wrote for the newsletter For The Love Of Port:  http://www.fortheloveofport.com/guest-corner-articles/ramos-pinto-the-kiss
I am not always lucky that I can combine my passion for culture and my passion for wine directly like in the case of Ramos Pinto. But somehow they often work together. I do write notes and I am trying to develop my skills for tasting and putting words together afterwards. But more often I tell stories and give information or make interviews with the people behind the wine. That – and hopefully a lot of tasting notes – is what I hope to publish here in the future.
Indsendt af Bjarne Mouridsen kl. 07.32 Ingen kommentarer:


1983 is not among the best port vintages and overshadowed by 1985. But in a matter of fact some of the wines have received good reviews, e.g. James Suckling, who in his book Vintage Port gives Cockburn 97 point.
Scores like that is of course not objective, but a matter of personal preferences and other circumstances. But Cockburn was the overall winner too, when The Vintage Port Club in Denmark recently tasted 14 different versions of vintage 1983. A fine tasting with some good bottles, but with some disappointments as well – due to a couple of corked bottles.
Roy Hersh among others mentions that Cockburn has a lot of defect bottles in that year. Apparently we were lucky, both our bottles were fine. Dark mahogany, a little resistant in the nose, but with a lot of dark berries and vanilla. Deep and powerful.
The tasting was blind, which led to some surprises. Dow is usually among the best of the vintage, but did not perform well this evening. Pale with some cherry, but without power at all. I would never have guessed it was a Dow. Another disappointment in my opinion was Fonseca, which smelled bad and did not taste a lot better. And it did not get better. 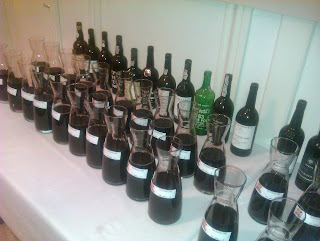 The evening’s second place was split between Nieport and Smith Woodhouse. I myself had Taylor as a favourite followed by Graham, Warre, Niepoort, Ramos Pinto and Cockburn.
Taylor was well balanced and ready for drinking, but perhaps not with a long life ahead. Niepoort was a bit hidden in the nose, but with a long tail with pepper and nice tannins. Ramos Pinto and Warre still had a lot of power and tannins too.
Some of the wines performed well, but 1983 will never be a classic or top vintage. Too many disappointments, and quit a lot of wines, e.g. Borges and Feist, had the best of their lives behind them.
The Vintage Port Club normally votes after a tasting. The participants are giving the best wine 3 point, the second best 2 point and the third 1 point. This was the result:
Cockburn: 23 point
Niepoort and Smith Woodhouse: 20 point
Ramos Pinto, Warre and Gould Campell: 18 point
Taylor: 13 point
Graham, Fonseca and Quarles Harris: 11 point
Feist 5 point
Borges and Ferreiras Quinta do Seixo: 2 point
Dow: 0 point
Indsendt af Bjarne Mouridsen kl. 05.45 Ingen kommentarer:


Why calling this new blog about Wine for "More than Wine"? Well, that is excactly what it is about.
I am a journalist - and I am a winelover. In my work and on this blog, I try to combine the two of them. That means that I will be writing about wine with tasting notes, but not just that. I will try to tell stories connected to the Wine, the District or the Country as well.
I have a big passion for Portugal. Because of that you will often find something about port and portuguese wine here. But not only. My passion for Wine is general. I am curious, open minded and allways interested in learning and experience more.
I am from Denmark, and English is not my native language. I will try to do my best, but I hope that you will excuse the mistakes, that will appear.
Indsendt af Bjarne Mouridsen kl. 04.01 Ingen kommentarer: