Wine at a meeting


The board of The Vintage Port Club does not have meetings that often. But when we meet, we are always having a glass or two, and not just port, but table wine as well. Often the meeting include a dinner, and we try to match the wines too the food.
Normally everyone brings a bottle or two and often the wines are served blind. Yesterday’s list of wine was quite impressive – not just in numbers but in quality as well. I did not make notes, but here is the list: 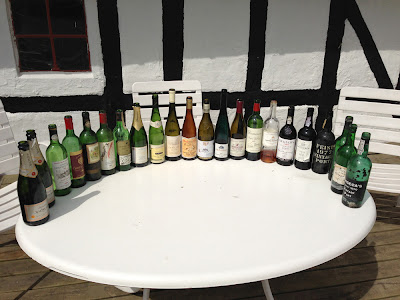 A duel between Single Quinta Vintage and LBV


Single Quinta Vintage (S.Q.V.P.) is a category of port that I find very interesting and challenging. Interesting because it the most pure product. As a principle it is based on grapes from the same harvest and the same quinta which gives more variation due to the differences in soil, locality and microclimate. Just think of the differences of rain and heat in the Baixo Corgo and the Douro Superior… This explains why you can find excellent Single Quinta Vintages in years where the harvest in general was not that good. In other words it is among the S.Q.V.P.´s that you will find the terroir of the Douro expressed more clearly that in “real” Vintage, which is a made of a blend of the best grapes from different quintas and places in the region.
On the other hand there is some confusion connected to the category. It is not a formal category described in the “Regulamento das categorias especiais do vinho do Porto”, but on the website of Instituto dos Vinhos do Douro e do Porto (IVDP) I have found this definition:
These Vintages are unique in that they are not only the product of a single harvest but also of a single quinta, or wine estate, which makes them truly exceptional.
The Portuguese version does not talk about quinta, but “uma única vinha”, where vinha means either wine estate or vineyard.
Traditional S.Q.V.P is produced when a company does not declare “real” vintage and if – of course – the harvest on the specific quinta is good enough for the purpose. But the same goes for other types of blended vintages which also are sorts of Second Wines like Fonseca Guimaraens, Noval Silval and Graham´s Malvedos – the latter a topic that has been discussed many times. Before Malvedos was more a brand, but lately the quinta has given its name to real Single Quinta Vintage.
After the new law from 1986 which allowed independent producers to export port direct from the Douro, more S.Q.V.P.s has been added to the marked. Instead of selling their grapes to the big companies, growers wanted to produce port themselves under their own name and brand – and some of them are declaring S.Q.V.P. nearly every year. That is another reason why the category is a challenge. New brands of different quality are popping up every year. There is always a new player on the marked ready to be tasted and tested.
Another sort of Second Wine to Vintage is of course Late Bottled Vintage – “The Other Vintage Port” as Roy Hersh once called it in an article. Today LBV is produced nearly every year, but opposite vintage it is stored between 4 and 6 years in large barrels. There are different types of LBV, but in general they can be divided into filtered and non filtered – where the former is ready to drink when bottled and the latter will gain from maturing in the cellar.
Both S.Q.V.P. and LBV can be excellent, and often you will find very good value for the money. But what if you compare those two categories? Which one are the best? Can you taste the difference when they are young? Those were the questions, when The Vintage Port Club recently invited to a duel between S.Q.V.P. and LBV both from the year 2005.
The wines were Quinta do Bomfim and Dow´s LBV, Fonseca Guimaraens and Fonseca LBV, Graham´s Malvedos and LBV, Quinta do Passadouro and LBV, Noval Silval and Noval LBV, Quinta de Ervamoira and Ramos Pintos LBV and finally Quinta de Vargellas and Taylor´s LBV.
And before that we had a little warm-up with Delaforce Quinta da Corte 1980 and Graham´s Malvedos 1968, 2008 and 2009. 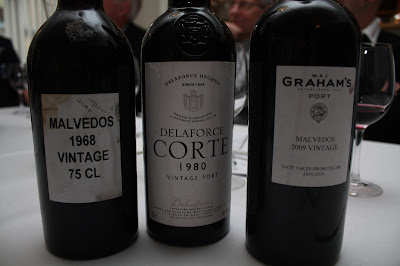 Of the first four the Malvedos 1968 was the peak. Red brown with white rim and with a good balance between acid and fruit. Still fresh and nice. The two younger brothers had a lot of fresh fruit, tannins and acid and a very good potential for developing. I don’t remember that I have tried Quinta da Corte before, and unfortunately this bottle was not a pleasure. It was sticky in the nose, unbalanced and lacked fruit and power.
After that followed all the bottles from 2005. Most of them were not mature yet, had strong tannins and resulted in purple tongues. To make it more difficult they were all served blind and in random order. That’s means that besides finding out which ones were single quintas and which ones were LBVs, we should try to figure out the names of the companies as well.
Honestly it was not easy at all! I identified the LBV´s from Dow´s, Graham´s, Fonseca and Ramos Pintos, but the latter I thought was a vintage. The same with the LBV from Noval – and then for other wines it was the opposite: I degraded some of the vintages to LBVs. For educationally reasons it might have been better to taste them two by two, giving us a chance to compare the LBV with the S.Q.V.P. from the same brand.
After the tasting, but before the names were unveiled, we voted for the best wines of the evening: 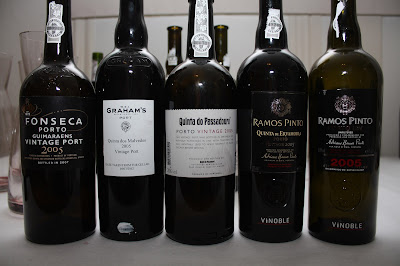 After that followed Dow´s Bomfim, Taylor´s Vargellas, Graham´s LBV, Passadouros LBV and Noval Silval. All in all 80 % of the votes were given to the Single Quinta Vintages.
Therefore my conclusion will be, that it is possible to taste a difference between S.Q.V.P. and LBV – and in generally the former perform better that the latter. But you can make mistakes as well and a good LBV – like the one from Ramos Pinto – can compete and often they will be good value for the money.