Old steam locomotives, the Royal Family’s carriages, omnibuses and model railways. And then Riesling, Pinot Noir, Touriga Nacional, Sangiovese and Gewürztraminer. Trains and Wines. I love both – for travelling and for pleasure.
The Danish wine retailer, Holte Vinlager, recently invited to a Wine Festival at an extraordinary place, The Danish Railway Museum in . Thereby they made is possible to drink lovely wine from all over the world while looking at old locomotives and carriages.
The Wine Festival was part of a caravan with many producers touring around . Tasting wine is always nice, but even better when it is served by the people who have made it and know all the details about grape varieties, soil, harvest, fermentation and storage of their wine. Not to mention people who are enthusiastic and have passion.
”It is always something special to taste wine with the people, who are making it. Therefore it is a unique chance for our customers”, explained Boy Levin from Holte Vinlager.
All together is was possible to taste more than 140 different wines from sparkling Champagne over white and red to late harvest wine and sherry from countries like France, Germany, Austria, Spain, Italy, Portugal, South Africa, Argentina, Chile, United States, New Zealand and Australia. With so many different possibilities, you have to make some decisions. My decision was to concentrate on a few regions and taste both the entry level and the more expensive bottles. Here are some of the notes from the choices I made.
After dry from Charles Ellner, I started in , first Joseph Cattin and then Chateau d´Orschwihr.

The Cattin family has produced wine through three centuries on a broad range of grape varieties from all over . I tried some of their basic wines, Riesling 2012, Pinot Gris 2013 and finally Pinot Noir 2011. The first was dry and fresh with citrus, minerals and floral notes. The second had more fruit flavours and apricot and was a bit spicier. And then I must admit that I have always found Pinot Noir from to light. It has some of the typical fruit flavours, but is lacking body and power.
The Hartmann family, who owns Chateau d´Orschwihr, has vineyards both around Enchenberg and Bollenberg, the latter a terroir famous for its Gewürztraminer. I tried the fresh, dry and fruity Riesling Bollenberg 2011 with lemon and pineapple on the pallet, and then Pinot Gris Bollenberg 2012 which had more acid. They were followed by to very delicious vines, Gewürztraminer Bollenberg 2011 and Cuvée Madame 2002. The first with exotic fruits like apricot and elderberry, the latter sweat with peach and honey and some floral notes in the nose.
From Burgundy Georges Lignier & Fils brought a white, straight and clean Chardonnay, Montagny 1. cru 2011 and then three red: A very young Morey St. Denis 2011, Morey St. Denis des Ormes 1. cru 2009 and Chambille-Musigny 2008. Typically tasty Pinot Noir with a good structure, raspberry, fruit and some spices.
From the Douro in came Rafael Molezun from Real Companhia Velha, whom I met some days before at the Port Festival in . This time he brought the companies table wine from non expensive Porca de Murca and from Evel. The white Porca de Murca Bianco 2011 was very fresh with lemon, a bit pineapple and nice acidity. It is a blend of Viosinho, Gouveio, Moscatel, Arinto and Fernão – and a very good buy when it comes to cheap white wine. The Porca de Murca Tinto 2012 and Tinto Reserva 2009 is made of typically port varieties like Touriga Nacional and Touriga Franca, both fruity and well bodied. The Evel Reserva Douro 2008 was very dark and had cherries and plums on the palette and a lot of power. More structure and the typically Douro-taste.

Finally I visited two Italian tables. In my opinion the most impressive one, when it comes to value for money, was Produttori di Govone – an association of 250 members, who produce more than 3 million bottles a year. From I tried their Anniversario 2011, Barbera d´Alba 2007, Barbaresco 2010 and Barolo Reserva 2005 and then they also had a Tuscan wine, Ca´ del Toscanello 2009. The Barbera was very fruity and creamy. Ca´del Toscanello based on Sangiovese was a nice surprise. Cherries and darker notes, mature and smooth, but with good tannins as well and a long tail.
From Valpolicella Cantine Benedetti presented their Ripasso and Amarone wine from the entry level to the top. The entry level, Antico Borgoceo, honestly disappointed me. Benedetti Ripasso and Amarone Croce Gal 2006 (Corvina Veronese, Corvinone, Rondinella and Croatina) were both very concentrated with a lot of red berries, black currant and some almonds as well.
All in all the Wine Festival was a very inspiring event with producers showing both their entry levels and some products of high quality. I sure will be back next year.

Umbria – close but not Tuscany

Last week I went to a kind of Giro d´Italia of wine. It was the independent Danish importer, Vinotek A Fynnis, who invited to a tasting through the Italian wine regions: , , , Abruzzi etc. and a region that is less known, .
When we talk about we normally refer to white wine from Orvieto. But the region produces a growing amount of red wine as well with better and better result.
was represented by export manager Gian-Andrea Dutler from Castello Monte Vibiano, who served five different wines and one of them in different years. The castle is placed on a hill close to in the district called Colli Perugini.
Gian-Andrea Dutler told me, that there has been a change in the region during the last 10 years. Before most of the wine was produced by bigger cooperatives and they mostly made white wine. But today small and independent producers are having focus on red grape varieties as well – both local grapes like Sangiovese and Sagrantino and international ones like Merlot and Cabernet Sauvignon. The area gets less rain and has a hotter summer than . The result is wine a bit like those from , and Gian-Andrea compares his best wine, L`Andrea with a Super Tuscan. 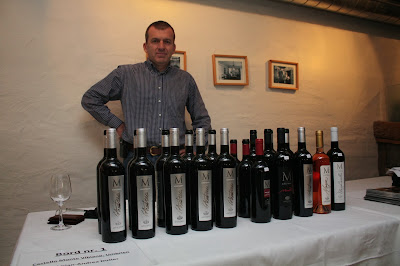 All in all Castello Monte Vibiano produce around 220.000 bottles a year of which 180.000 is red. More than 90 % of the production is for export.
I tasted these wines from Castello Monte Vibiano:
Maria Bianco: White wine based on a blend of Trebbiano (52 %), Grechetto and Sauvignon Blanc. Fresh and crisp with lemon and a bit pineapple. Nice acidity but perhaps a bit one-dimensional.
Villa Monte Vibiano, Rosso dell`Ubria: Made mostly of Sangiovese. Some red berries in the nose, a bit light in the colour and the style and a bit sharp too. Typically Sangiovese-taste, but will do better with food.
Mon Vì, Colli Perugini Rosso: Made of 70 % Sangiovese, 15 % Merlot and 15 % Cabernet Sauvignon. Darker in colour and fuller bodied. Fruity with soft tannins and very drinkable, but not that deep and broad on the palette. A more international style and a bit of a pleaser due to the blend.
L´Andrea, Colli Perugini Rosso: Made of a selection of the best grapes, 50 % Sangiovese, 15 % Sagrantino and then some Merlot, Cabernet Sauvignon and Syrah. Stored in barriques for 15 months. I tried 2003, 2005, 2006, 2007 and 2008, and notices how the style has change to the better. In general it was a great wine, with red berries and typically notes of vanilla from the barriques. Less smooth than the second wine, darker and more powerful and with stronger tannins. 2003 had softer tannins now, but it seems like the cask was a bit too much burned. From 2006 that changed and gave room for elegance and fresh cherries. A great wine with beautiful tannins. 2007 had more fruit and more power. It still has a long life. 2008 was still young but promising too, but not as good as the two previous years.
After Castello Monte Vibiano I tried wine from other regions too. Among others I tasted a fresh white wine from Piedmont, Roero Arneis Camestri 2012 from Marco Porello, a Soave 2012 and Soave Classico 2011 from Monte Tondo in . Among the reds I had Chianti Classico 2010, Chianti Classico Riserva 2008 and Poggiassai 2010, all from Poggio Bonelli. In my opinion the Riversa was much better structured than the Super Tuscan, Poggiassai, which truly disappointed me a bit. And finally I will mention a nice red from , Cerasio Cannonau di Sardegna 2009 from Cantina Pedres. Sorry, just for namedropping and not adding notes…