Vinho Verdes – whites for the future

We call it Vinho Verdes with an s. It is more than one type of wine…
Something like that I was told by António Luís Cerdeira, when I visited CVRVV, Comissão de Viticultura da Região dos Vinhos Verdes, in Porto this spring. António showed me around in the laboratories and gave me an introduction to Vinho Verde followed by a tasting. 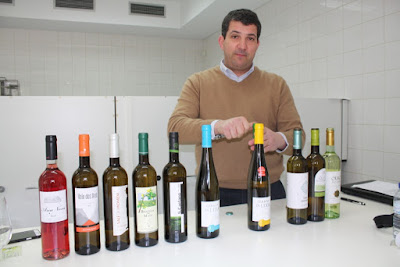 Back home in I decided to continue my study and taste some of the Vinho Verdes available on the Danish marked. From the cheapest, sparkling ones bought in supermarkets to more expensive bottles from small importers. From ordinary blends to excellent single grape variety wines. From wines meant to be drunk young to wines that can age for several years. Some tasting notes will follow, but first an introduction to the region and its wine.
With vineyards Vinho Verde is the largest DOC in and among the largest demarcated regions in . Other figures tell that there are about 25.500 grape growers and among 2.000 different brands in the region, placed in Minho in the far north of mostly between the two rivers, Minho and . The region is dived into nine sub regions: Monçao & Melgaço, , Cávado, Ave, Sousa, Basto, Amarante, Baião and Paiva.
Literally the name means green wine, which often is understood as a young wine picked early and without a long life. If you talk about wines in the entry level, that still seems reasonable, but in a matter of fact the name refers more to the green colour covering the landscape in the region. Even one of the main dishes, the Caldo Verde soup is green! The winter is cold and very rainy, the summer hot and dry. The Atlantic Ocean has a lot of influence on the microclimate and so does the rivers Minho, , Cávado, Ave and Douro and the inland mountains, which separates Minho from the region and Trás-os-montes, behind the mountains.

The vines used to grow high either climbing up trees or between them in pergolas called ramadas. The latter still exist, but today you will mostly see regular vineyards with vines supported on high vertical cordons. Red varieties used to be quite common, but today 86 % of the production is white wine, just 10 % red and the last 4 % rosé. The most important red varieties are Amaral, Alvarelhão, Borraçal and last but not least Vinhão. The most important white varieties are Alvarinho, Avesso, Azal, Arinto, Loureiro and Trajadura. The following is CVRVV own description of the white varieties:
Alvarinho: Intense aroma, complex, fruity character (quince, peach, banana, passion fruit and litchi), floral (orange blossom and violet) and dry fruits (almonds, hazelnut and nut).
Avesso: Mix between the fruity flavour (orange and peach), almonds (nuts) and floral.
Azal: Fine flavour, fresh, citrus fruit notes (lemon and green apple), richest in acidity
Arinto: Rich flavour, from fruity, citrus and tree fruit (ripe apple and pear) to flower (lantanas). Loureiro: Elegant aroma, fruity (citrus) and floral (rose and milling) and molasses (bouquet). Trajadura: Delicate flavour of tree fruits mature (apple, pear and peach), lowest in acidity.
Most of the wines produced are blends of more varieties like 60 % Loureiro, 20 % Arinto and 20 % Trajadura, but in the last decades single varieties are getting more and more popular – especially based on Loureiro and Alvarinho.
In general you can say that wines from Vinho Verde are dry, fresh and crispy (with more, less or none carbon dioxide) and with high acidity and low alcohol. In a world of wine, where there seems to be a change from the heavy, oak matured white wines with high alcohol – like new world Chardonnays – to the more light ones, Vinho Verde must be a wine for the future.
My notes from the wines tasted in are brief. Therefore I will only mention a few of them, followed by the more detailed notes on the wines tasted in . 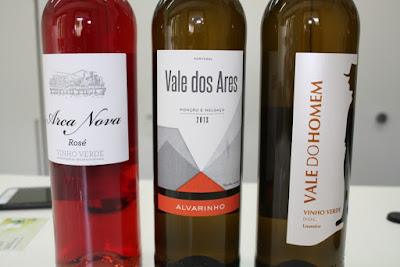 Ouro do Lima 2013:  A blend of Loureiro and Trajadura. Traditional, fresh and sparkling with CO2.

Vale do Homem Loureiro 2013: Single grape wine based on Loureiro. Different in the nose, more floral, but with citrus as well. Fresh, elegant and with notes of honey on the palate.

Solouro 2014: A blend of 70 % Loureiro, 20 % Trajadura and 10 % Pedernã, aged on steel tanks. Pale yellow-green, sparkling. Apples, citrus and green grass in the nose. Nice acidity and a fresh fruity taste. Not a complicated wine, but tasty when served chilled either on the terrace or with white fish or light meat. The name, Solouro comes from Sociedade Agrícola do Louro based in the sub region Ave.

Aveleda 2013: A blend of Loureiro, Trajadura and Arinto. Yellow-green and clear. Sparkling with a fresh nose of apples, citrus and a bit exotic fruit. Fresh and forward. A wine supposed to be drunk now and here. Quinta da Aveleda is owned by the Guedes family.

Casal Garcia 2014: Produced by Aveleda. The biggest brand on the export marked when it comes to quantity. A blend of Trajadura, Loureiro, Arinto and Azal. Pale yellow-green, sparkling and crispy. Apples and citrus in the nose. Light and fresh, but short on fruit and depths. Nice acidity and aftertaste. 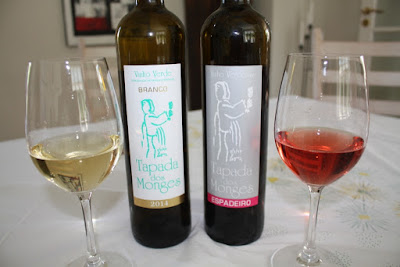 Tapada dos Monges Espadeiro Rosé 2014: Single grape wine made of Espadeiro. Very fizzy, pale, raspberry red. Shy in the nose but with raspberry. Dry and a taste of red berries, but very light and lacking fruit. Short. A fresh rosé, but without character and complexity.

Tapada dos Monges Loureiro 2014: 100 % Loureiro. Yellow-green and a bit fizzy at first. Fresh with fruit, lime and flowers in the nose. A bit short but very fresh and tempting. Good value for money.

Tapada dos Monges Fernão Pires 2011: A special edition (only 1500 bottles) made of Fernão Pires – a grape variety that is more common further south – and in cooperation with chefe Álvaro Costa for the 40 years anniversary of Vinhos Nortes, the company behind the brand. Golden with a complicated nose with fresh citrus, tropical fruits and smoky notes. A wine with complexity and depths but perhaps too less acidity to be in balance. Different and not a typical Vinho Verde at all.

Tapada dos Monges Tinto 2014: A blend of Vinhão, Amaral and Padeiro. Dark and inky like elder berry most or a sample direct form the lagar. Fizzy when poured. A nose with cherries and other dark berries, lots of fruit juice, acidity and tannins. Sour like a Belgian Geuze beer. Very different, but in matter of fact a fresh, young wine. White is the future, but I sure hope that red Vinho Verde will continue to be produced. 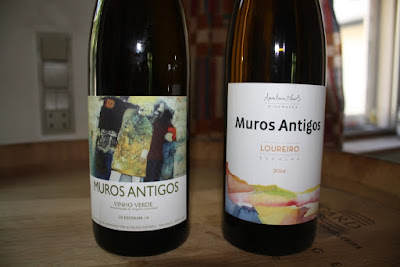 Muros Antigos Escolha 2014: The first of three wines made by Anselmo Mendes – one of the greatest winemakers in Vinho Verde. A blend of 20 % Alvarinho, 40 % Loureiro and 40 % Avesso. Pale yellow-green, not sparkling. Light in the nose, but with fruit, apples, pears and a bit citrus. Forward, crispy with floral notes. Dry and in balance. Nice aftertaste. A proof that an ordinary blend does not need carbon dioxide to be fresh and crispy.

Muros Antigos 2014 Loureiro Escolha: 100 % Loureiro. Clear, bright, golden without carbon dioxide. Citrus, pear and fresh flowers in the nose. Very fresh with nice acidity. Flowers, citrus and some minerals on the palate. Fruity with a long aftertaste with honey but other vice dry.

Contacto 2013, Alvarinho: 100 % Alvarinho from the master of Alvarinho, Anselmo Mendes. No bubbles, but still youthful and fresh. Yellow-green and quite intense. Intense and exotic notes in the nose with mature pears, pineapple and passion fruit. Fresh with acidity, but full-bodied as well with complexity and notes of honey. A great glass that shows the high quality of the region and of the Alvarinho grape as well. 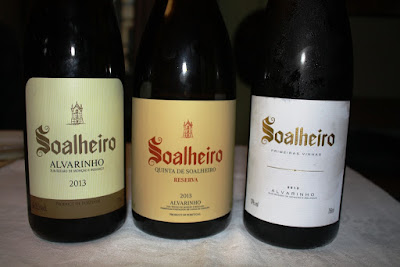 Alvarinho Soalheiro 2013: Quinta de Soalheiro is one of the best producers from the sub region Monçao & Melgaço. Made of grapes from Alvarinho vineyards around Melgaço. Yellow-green, clear. Fresh and intense with citrus and pineapple. Crispy with great fruit and minerals, elegant with a good aftertaste. Can be enjoyed as an aperitif or as a fresh wine to fish or light meat like chicken with piri piri.

Alvarinho Soalheiro Primeiras Vinhas 2013: Made of grapes from the oldest vineyard at the quinta. Yellow-green, clear. At first not that intense in the nose, but after a while when cooling down with greater intensity, citrus and some exotic fruits like honeydew and pineapple. Very intense in the mouth too. Fresh and with minerals, but creamy and nutty as well. A lot of fruit to balance the acidity. Complexity and a long aftertaste. A great glass of wine that really shows the quality of the Alvarinho grape.

Alvarinho Soalheiro Reserva 2013: Stored on new and old French oak and with battonage. Golden in colour, clear. Very powerful and intense in the nose with some smoked bacon, but with freshness, citrus, pineapple and other exotic notes as well. Full-bodied and complex with mature fruit. Another great glass that shows the aging potentiality of Alvarinho.

My conclusion is clear. Vinho Verdes – yes there is more than one style – deserves to be known by more wine lovers and in general. Both for the fresh, fizzy wines in the intro level and for the more exiting and complex whites from great producers like Anselmo Mendes and Quinta de Soalheiro. They are tempting and delicious wines to remember.
Indsendt af Bjarne Mouridsen kl. 07.55 Ingen kommentarer: