Last week ViniPortugal – an organization that is promoting Portuguese wine – invited to a Master Class with Rui Falcão at Restaurant Årstiderna in Malmö. Unfortunately it seems like ViniPortugal has stopped their efforts to convince Danes about the quality of their products, so I have to go to Sweden instead. And so I did. 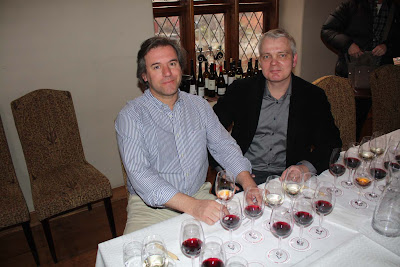 Rui Falacão is among the most respected wine journalists in Portugal. He writes for the daily newspaper Público and the magazine Wine – Essência do Vinho. Besides that he has published several books about wine, one of which is the annual Guia dos Vinhos. Because of this involvement he tastes more than 4000 different wine per year and is often giving lectures about Portuguese wine.
The aim with the Master Class and the tasting was to show the variety of Portuguese wine production. The variety has more than one cause, Rui Falcão explained. First of all it is a fact that more than 300 of the known grape varieties in the world are represented in Portugal, and some of them only grow there. Of course you can find Chardonnay, Cabernet Sauvignon and Merlot, but not as often as in other European countries and in the New World. The identification and registration is not finished. It is hard work because it is common in Portugal to have mixed varieties in the same vineyard. The reason for that is historical. Portugal has many small growers, and they did not want to risk that the whole harvest was spoiled due to weather etc. If they mixed the grapes, some of them might fail, but the rest would be ok. Today about 20 % of the vineyards are still mixed varietes.
Because of this single grape wine is not that common, even than more producers has started to make some. Recently I tried both Touriga Nacional and Tinta Roriz from Quinta do Crasto e.g. But normally the wines are a blend of different varieties blended either in the field or after fermentation.
Another reason for the variety is the climate or more accurate the microclimate. Portugal is situated between the Atlantic Ocean and Spain and has hills and mountains which cause big differences. An example is in the North where there is a huge difference between Minho at the coast where it is cool and wet – and the Douro Superior close to Spain where it is hot and dry. That gives more freshness and acid in the grapes for Vinho Verde, and more fruit and ripeness for the grapes for red and port.
On top on that the soil is very unlike as well (granite, schist, clay etc.) which gives different terroir. A variety as Touriga Nacional e.g. is not the same grown in the Douro as in the Alentejo, where you can find lemon in the taste, Rui Falcão explained. 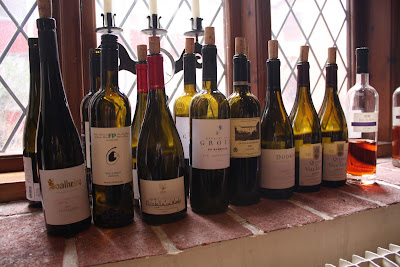 After the lecture we tasted eight wines – two white, five red and one fortified – to illustrate the differences and the high quality of course.
We started with a Vinho Verde made of Alvarinho – in my opinion one the best of the white grape varieties. Quinta de Soalheiro Primeras Vinhas 2011 was light and golden, with exotic fruit like pineapple and peach in the nose. Fresh and full bodied with a long, great aftertaste.
The second white was a Bairrada, FP 2010 from Filipa Pato, made of a blend of Bical and Arinto. Lighter in the colour and the nose – a bit like a Riesling. Some apple, lemon and pinenotes. Full bodied, fresh and with a nice and balanced acidity. Some notes of cask, but not too much.
The first red was a Quinta do Saes Reserva Estágio Prolongado 08 from Alváro Castro in Dão. Dark with a white rim. Powerful with dark berries and a bit liquorice in the nose. Soft tannins and a long tail with good acid. The wine was a proof that Dão today is apple to make more elegant and not just harsh wines. It was a blend of Touriga Nacional, Alfrocheiro, Jaen og Aragonez.
Next stop was Alentejo with two different wines. Herdade dos Grous 23 Barricas 2008 represented the more international style, which the region has a lot of success with. A mix of Touriga Nacional and Syrah gave a slightly spicy nose with some pepper, but a hint of lemons as well. Very straight, a lot of fruit but a bit grandiose. I preferred the Quinta do Mouro 2007, which was more classical in its style. A deeply red, powerful and very potential wine made of a blend of Aragonez, Alicante Bouschet, Touriga Nacional and a bit Cabernet Sauvignon.
From the Douro we had two different wines as well. Duorum Vinhoas Velhas 2009 from Douro Superior is made of grapes from old vineyards, a blended field mixed with 45 % of Touriga Nacional. It was deep red with purple hues, but surprisingly soft and straight. A typical character of Touriga Nacional and nice tannins. Quinta do Vale Meão 2010 from the hands of Fransisco Olozabal was made of a blend of the grapes known from port. Still too young and closed, but with more fruit and a nice tempting smell of blackberry. A long complex aftertaste with a lot of acid and fruit and a very good potential for developing into a great wine.
Finally Rui Falcão served a Moscatel Roxo Bacalhöa 2002, a red variation of the well known fortified wine from the area around Setúbal. Beautiful orange red with peach and some mint. Very sweet and delicious and with enough acid to make it well balanced. As a wine served to desserts it is a fine alternative to Port and Madeira, I – as a port lover – has to admit.
The variation of grapes and wines in Portugal is huge and deserves more attention in Denmark as in the rest of the world. Hopefully Rui Falcão Master Classes and the efforts of ViniPortugals will succeed. And hopefully they will include Denmark in their program again soon.