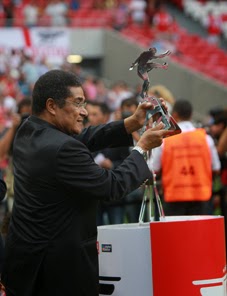 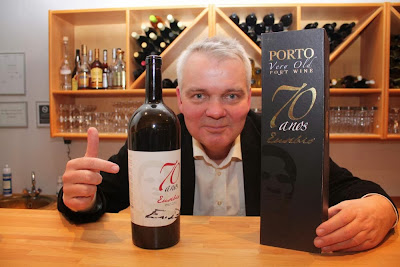 Among the different types of port, seems to have less attention. The common opinion is that they are useful as aperitifs either with or without tonic water. Or when it comes to the sweet ones, typically named Lagrima, they can go well with sweet desserts. But without debts and quality and perhaps even the new type, Rosé Port, is trendier with all its youthfulness.
But can be good quality as well. In a matter of fact when it is aged it can be splendid. In connection with the port festival at Børsen in in November, Henrik Oldenburg invited Jim Reader from C. da Silva who owns to comment a tasting of 10 different ports among which eight were white. Dalva is not a name that we hear a lot about when it comes to ruby and Its specialities are Tawny with age and recently C da Silva was founded in 1862, when Clemente da Silva moved to from . Jim Reader started in the company as a consultant when he left Cockburn’s after the Symington’s bought the company.
Dalva is selling standard ruby and tawny to countries like , , and . And then they have huge stockings of both red and white Colheita – and that was the reason why Jim Reader moved to the company, he told us.
Here is what we tasted: 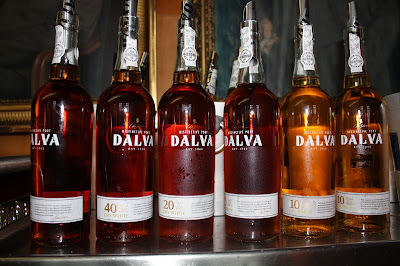 Dry White: Dry but not among the driest (sugar contest 45 g/l). Light and a bit golden in colour. A nose with lots of lemon, elderflower and a bit peach. Elegant and fresh.
Dry White Reserva: 6-7 years on oak. Yellow and with a darker impression in the nose. Slightly toasted and typically notes from the oak. Sweeter (60 g/l) and without the same freshness.
10 years Dry White: Golden. More complexity and less toasted. A fine balance between sweetness, fruit and acid. Nice, long tail.
20 years Dry White: A bit brown in the golden colour. Close to a tawny character. Some orange, figs and raisins in the nose. , almonds and honey in the taste. Nice acidity.
40 years Dry White: New on the marked. Light red and brown. A bit shy in the nose in the beginning, but with power and full-bodied. Still fruity and then of course notes from the oak. A very nice glass, but lighter in the style than a red 40 years tawny.
Golden White Colheita 1971: More sweetness and a different bouquet. A bit toasted, almonds and vanilla from the oak. Still with acid.
Golden White Colheita 1963: A great wine from a great vintage. Darker and more brown. More heavy in the nose, but still fresh in the mouth. Dry fruit and honey. Sweet, but with acidity as well. Good balance.
Golden White Colheita 1952: Very powerful and with more acidity, which makes it crisp and fresh. Caramel, honey and vanilla and a long, beautiful aftertaste.
Colheita 1966: Brown with brown sugar and almonds. More spirit and acidity.
Colheita 1975: Cherries in the nose, fruit, brown sugar, nuts and almonds and with quite some sweetness. 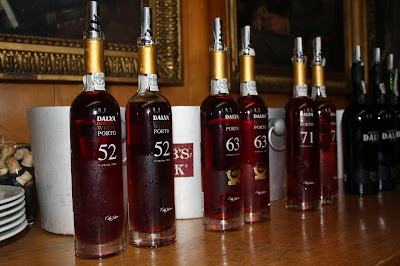 As written above, we had a couple of red Colheitas to compare with after the white ones. And the latter did very well. Lighter with more freshness and elegance. And we could see how the colour of the wine was closer as we went back in time, even though the two red Colheitas were a bit more red brown.
Jim Reader told us, that Dalva wants to send a Golden White on the marked each decade. When it comes to the 80s, they still have not decided which year to choose. I don’t know, what they have in their lodge, but 83 or 84 could be possibilities. In general white grape varieties are showing their best in a bit cooler years. High temperature can result in over ripeness. But when it comes to a year like 1963 it was splendid for both red and white grapes, Jim Reader told us.
After the tasting of Dalva, we went through 27 different examples of vintage 2011. I did not taste all and didn’t take notes, but among them I will shortly recommend Ferreira 2011, Niepoort and Niepoort Bioma, Taylor and Ramos Pinto.
At the Port Festival afterwards I noticed more white ports than usual. Ferreira brought a fine 10 years white, Andresen had some nice examples as usual and so did Niepoort and Santa Eufemia. I am pretty sure, that more companies will produce with age in the future. It will never gain a big market share, but I think that there is a growing interest for Colden Colheitas. Especially if the quality is high like those from Dalva.