In February Mr. George Sandeman was our guest at the annual Winemakers Dinner in The Vintage Port Club. At first we had a tasting of Sandeman Vintage, Vau Vintage and Tawny with indication of age, and afterwards a delicious dinner served with wines from Sogrape and more Port from Sandeman at restaurant Kok & Vin (Chef & Wine) in . 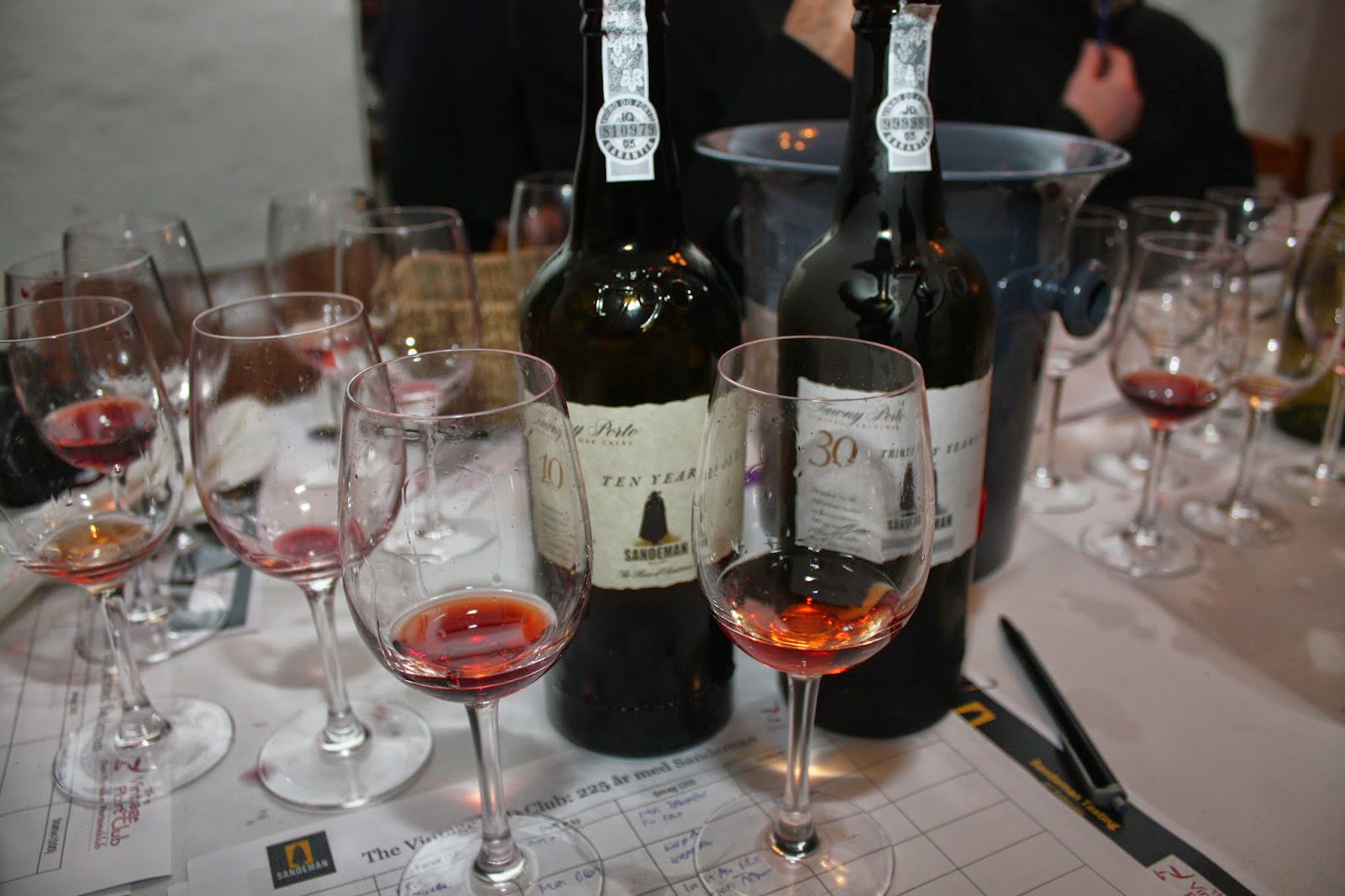 Sandeman was founded in 1790 by the Scotsman George Sandeman, who established himself as a wine merchant in and started to In 1811 the company moved into the beautiful arcaded building in , where Port lover and tourists are visiting the house every day. In 1928 the artist George Massiot Brown created the famous Sandeman Don who soon became an icon. The Don wears the cape of the Portuguese students and a Spanish Caballero hat and thereby unites the two fortified wines of the company: Port and Sherry. Sandeman used to produce more Sherry than Port, but today it is the other way around, George Sandeman told us during the tasting. 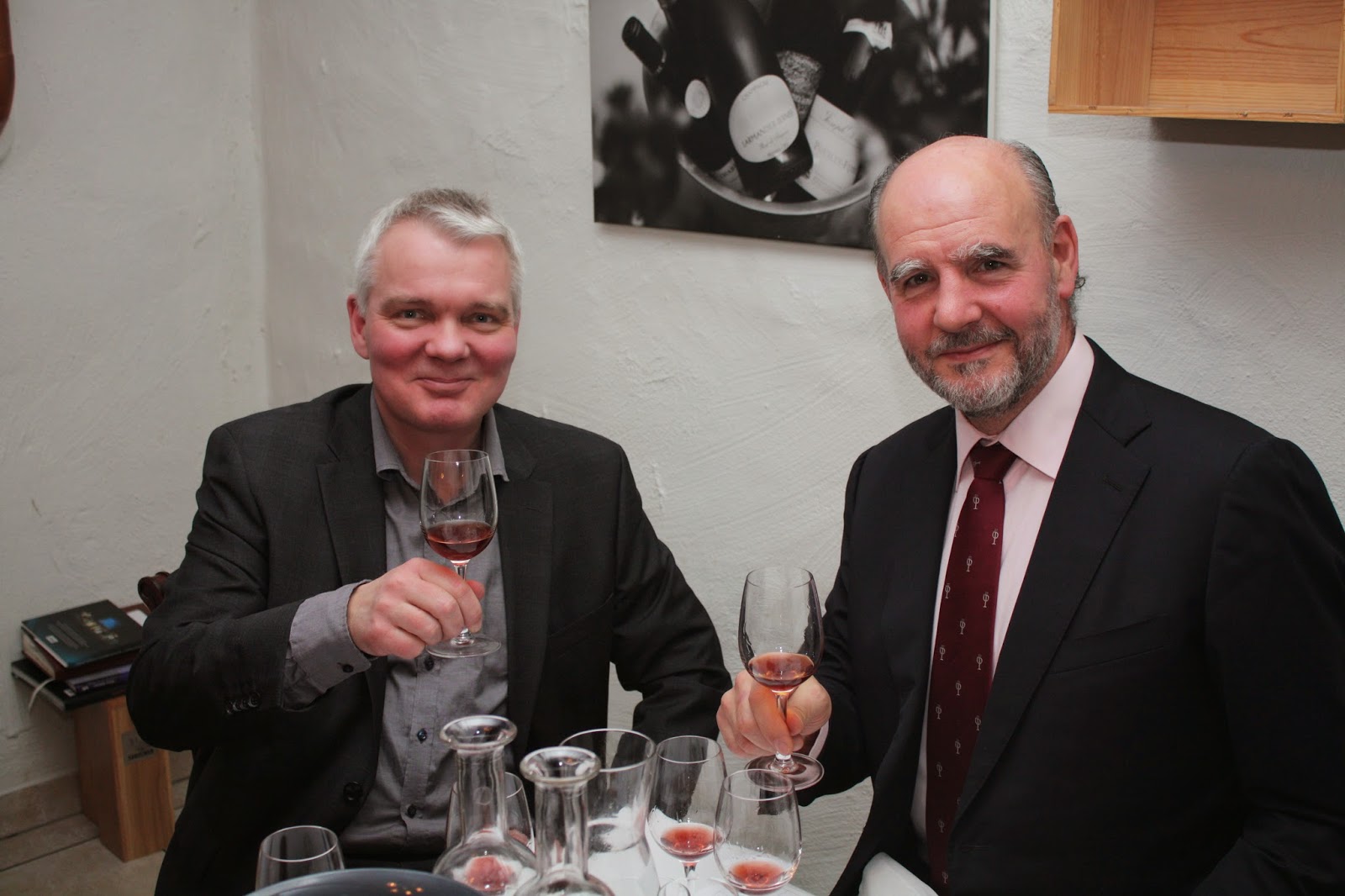 George is the 7th generation of the family. In 1980 the Sandeman was sold to Seagram, and from 2001 it has been part of the Sogrape Group, who own Ferreira and Offley as well. Besides that Sogrape is producing still wine all around including the well known brand Mateus.
George Sandeman admitted that during the 80´s the focus was more on volume and less on quality – a fact that probably has given the brand a reputation in of being a more commercial brand. But – as the tasting proved – the quality used to be very high. And perhaps more important the quality of the is high again like it always has been when it comes to Tawny with indication of age. Since 1994 George Sandeman and winemaker Luis de Sottomayor have done a great job and raised the brands reputation. I have tasted the Vintage 2011 several times, and I am impressed of the concentration of fruit and flavours. It sure will last for many years. 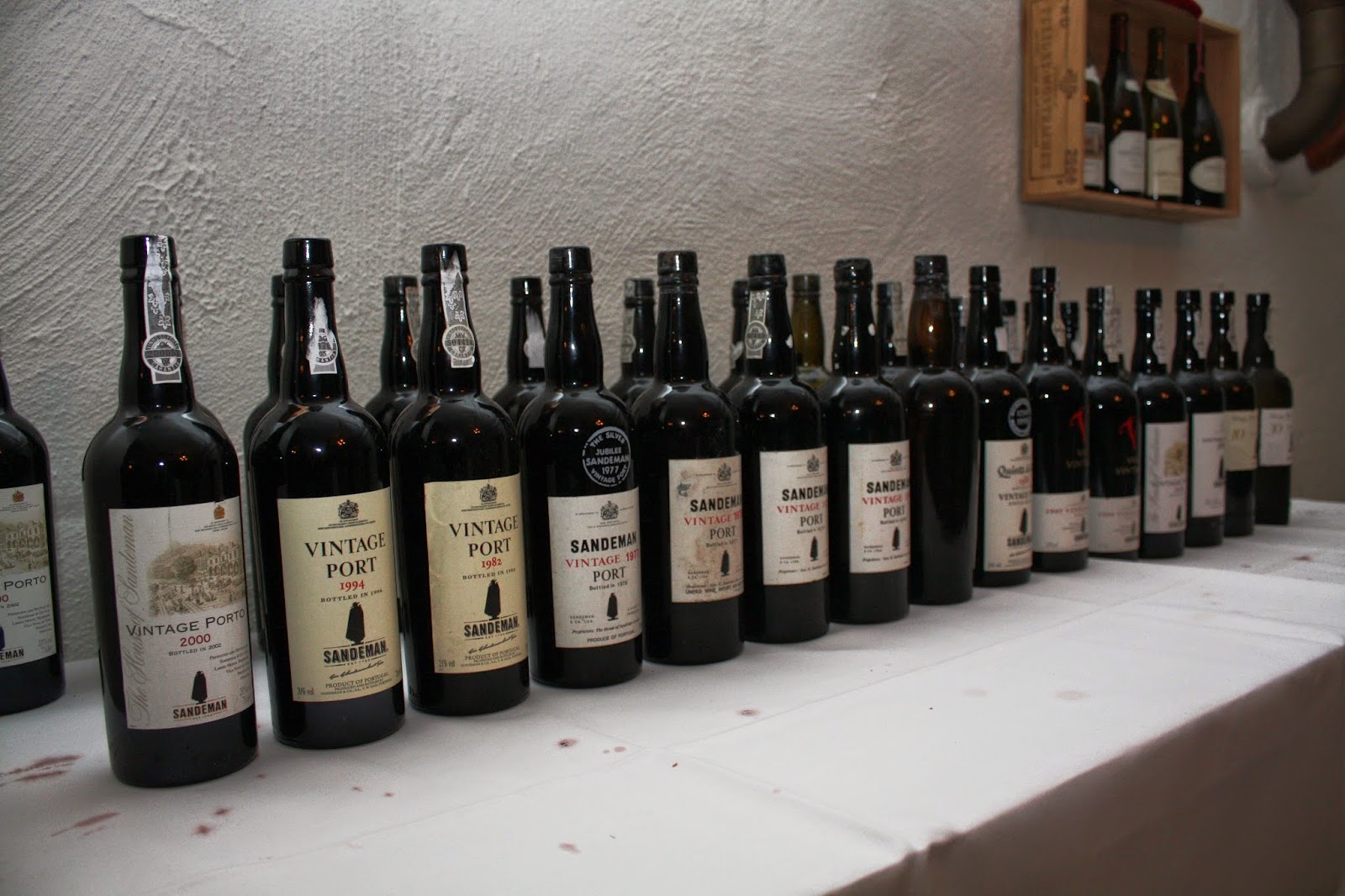 Vintage 2011 was not included in this tasting, but so was a long list of fine bottles, served in the order they are mentioned below.
Sandeman Vintage 2000: Dark ruby with great fruit, mature cherries and a bit cigar box. A nice taste with balanced fruit and acidity and a fine tail with pepper. Soft tannins and very drinkable right now, but will still develop.
Sandeman Vintage 1994: Performed better here than at the 1994 tasting last year. Red with brownish edge. A little milky in the nose at first, but with cherries and red berries. Fine mature and in good balance. Not that complex.
Sandeman Vintage 1982: One of the bottles were corked, the other one ok. Light red and muddy. Some red berries, but a bit anonymous and lacking power and fruit.
Sandeman Vintage 1977: Red with mahogany edge. A bit muddy and with some chemical notes in the nose. On the palate it had more complexity but not a deep wine. Mature and in fine balance.
Sandeman Vintage 1975: Light in the colour as a tawny, but with a nice nose of red berries. Fine on the palate, but light and a bit one dimensional. A nice tail with pepper. A good Port for breakfast, as George said himself.
Sandeman Vintage 1970: Red with a light edge. More fruit and more body. A nice nose with dark berries and cigar box. A very fine mature Port.
Sandeman Vintage 1966: A bit limpid, but with a nice red colour. Very intense and deep. Fruit and red berries in the nose and again some cigar box notes. A great structure and still with a lot of fruit, some spices and a fine balance. A great and delicious mature wine.
Sandeman Vintage 1934: Brown and with a Tawny nose as well. At first not that intense in the nose, but very concentrated and intense on the palate. Some fruit but more Tawny and chocolate notes.
Vau Vintage 1988: The first Singe Quinta Vintage from Vau. Later it changed into a brand for those who want to drink their Vintage young. Dark Ruby. A bit milky in the nose and still with powerful tannins and a lot of fruit for developing.
Vau Vintage 1997: Dark ruby, almost opaque and with expressive dark berries in the nose. Straight forward with soft tannins.
Vau Vintage 1999: Dark ruby. A bit more anonymous in the nose, but started to open up. Not as much fruit as the 97, but again soft integrated tannins and a fine structure.
Sandeman Vintage 2003: Dark ruby, close to being opaque. Very intense in the nose with blackcurrant and other dark berries. Juicy and with a good body and tannins for a long life.
Sandeman Vintage 2007: Dark ruby and purple. Fruit juice and fresh berries in the nose, but spices too. Very young and with fruit, acidity and tannins for a long, promising life.
Sandeman 10 years Tawny: red-brown with both fruit and nuts and notes from the cask. A fine and elegant wine, but not that complex.
Sandeman 30 years Tawny: Brown, yellow. A nose with orange, vanilla and honey. Intense and creamy in the mouth with a nice balance. Orange, hazelnuts and dried fruits on the palate. A great glas. 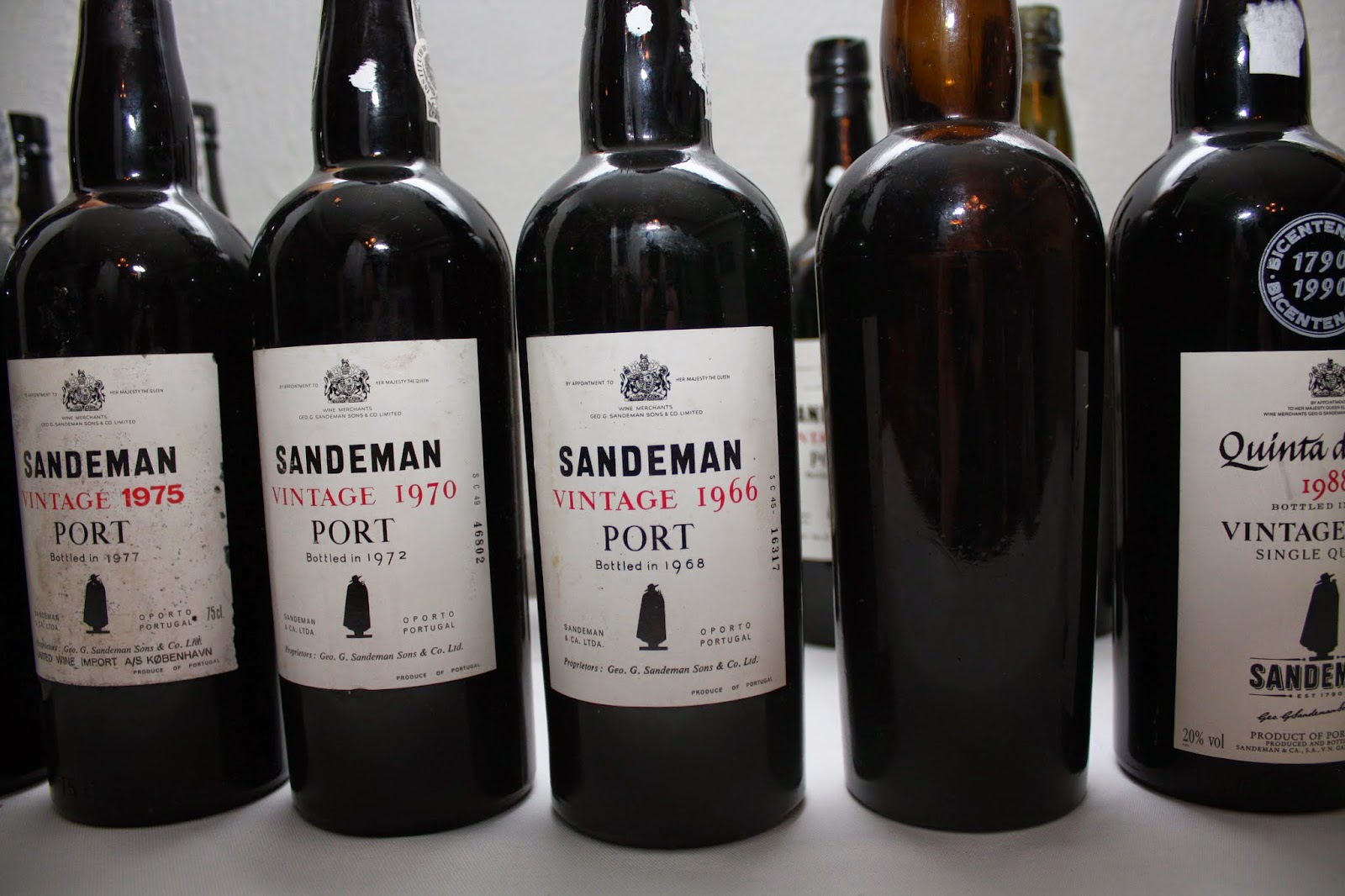 After the tasting chef Steffen Falkesgaard and his team served a very delicious menu with five courses, wines from the Sogrape Group and two more:
During the dinner I did not take notes, but shortly I will mention the Vinho Verde as very good, fresh and fruity as an Alvarinho should be. The white ”Encruzado” had more body and notes from the cask, and the two reds were great examples of the high quality in Dão and .

All together it was a fine tasting with some great ports among and a fine dinner in good company.
Indsendt af Bjarne Mouridsen kl. 05.54