Cristiano van Zeller is a big guy himself – and so are his wines. He is one of the famous Douro Boys – the five producers from Douro (Quinta do Crasto, Niepoort, Quinta do Vallado, Quinta Vale Meão and Zellers own Quinta Vale de Maria) – who joined forces to inspire each other and brand their still wines from the Douro. They all produce Port as well, but for the Douro Boys the fortified wines are second to still wines from Douro DOC or the broader Duriense VR. 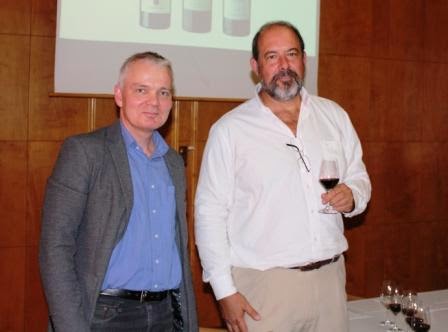 Some weeks ago Cristiano van Zeller visited Denmark for at tasting of his wines at the Port festival at Børsen in Copenhagen. The tasting for press and members of Port Clubs included 24 different wines – 15 of them still wines, the rest Port. But first Cristiano told us about himself and his view of the changes in the Douro.
The Van Zeller family arrived to Portugal in the 18th century and started as port shippers in 1780. The family was connected to the famous Quinta do Noval, but both Noval and the company; Van Zeller & Co. was sold in 1993. Later the brothers Fernando and Álvaro van Zeller founded Barão de Vilar and their cousin Cristiano started to work with the Roquettes from Quinta do Crasto and other of the member of the Douro Boys. In 1996 he took over Quinta Vale de Maria, which has been in the hands of his wife’s family, and after a renovation the production of both still wine and Port started. In 2006 the family bought back the old trading company as well.
The Quinta still uses lagares for the best grapes, and Cristiano told; that they soon will build some new ones instead of steel tanks. It is sort of back to basis, but with the important difference, that the modern granite lagares has temperature control as well. Another new-old trend is planting different grape varieties in the same field. These mixed fields with many varieties dominated the Douro before, but later most producers planted the five big varieties (Touriga Nacional, Touriga Franca, Tinta Roriz, Tinta Cão and Tinta Barroca) in different fields. Recently producers are going back to mixed fields, and not only with the big five, but with different varieties as well. The result is better, is the saying, and it seems like the different varieties are communicating concerning time of maturity etc. Off course the terroir of the different fields is important, and that is why Cristiano van Zeller has started a production of wines from single vineyards. 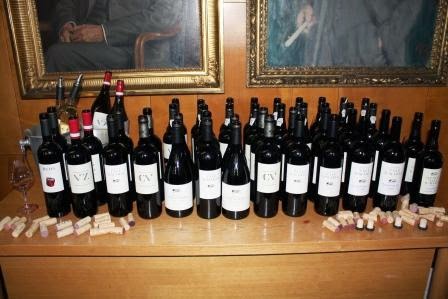 The tasting at Børsen included both white wine, red wine and Port. Here are some notes.
Rufo Branco 2013: A very fresh and straight white with fine acidity
VZ Branco 2003: Made of a blend of Viosinho, Rabigato, Codega and Gouveio, less acidity, heavier and with notes from the cask, but still balanced. A more complex wine in a burgundy style.
Van Zellers CV 2011 and 2012: A wonderful wine with a great structure. Deep and intense with dark berries, cherries and floral notes, some spices and tannins for at long life.
Vinha do Rio 2012: A single vineyard wine from a field close to the river Torto. A nice nose with dark cherries and on the palate raspberry, fruit and soft tannins.
Vinha Francisca 2011: Another single vineyard wine, named after Cristianos daughter. A bit shy in the nose, but elegant with fresh fruit and strong tannins.
Quinta Vale D. Maria 2007, 2009, 2011 and 2012: A nice, fresh and elegant wine with dark fruit and cherries and a nice balance. 2009 was closed, but 2007 was very drinkable and with a great structure and a long finish.
After these wines followed a lecture in different vinification processes. We had three different versions of Touriga Franca, harvested at the same time in 2013, but the first from steel tank, the second from a lagar and the third fortified. They were similar and different at the same time. The first one had green tannins and was a bit sharper in the nose, the second was more open, more concentrated and with softer tannins. The Port version was so to speak a fortified version of the second cask-sample.
Finally we had some different Ports. Reserve Ruby and LBV are both unfiltered and with nice fruit and body. They were followed by Vintage 2003, 2009 and 2011. The oldest one was beginning to soften up, an elegant wine with dark, ripe fruit and soft tannins. The two youngsters were powerful with a lot of fresh fruit and dark berries, immature but with elegance as well.
The last couple of glasses were two colheitas from Van Zeller & Co. made in cooperation with the cousins. 1970 was intense and in fine balance, a nose with dry fruit and figs. 1997 was a bit anonymous compared to the older one, but with notes of nuts and orange. 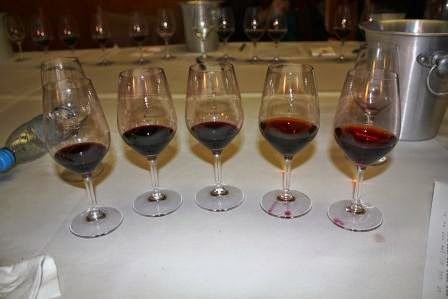