During my visit in Porto in June with fellow board members of The Vintage Port Club we visited some port lodges as well. First we went to Graham’s, then Barão de Vilar, Sogevinus (at Cálems lodge), Noval and finally Ramos Pinto.
Among the many port tasted, I will mention some highlights. 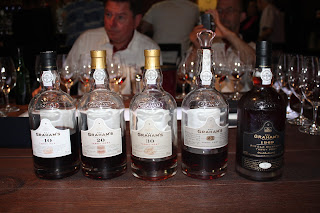 Gustavo Devesas served the new range of tawny from Graham’s. They are all very soft, smooth and drinkable. At first I thought that the gap between the 20 and the 30 years was too small, but after a while the 30 years Tawny gained a lot with its fresh orange and almonds and nice acid to balance the sweetness. After that we had two splendid Colheitas: The 1969 and the 1952 – the latter made for Queen Elizabeth’s Diamond Jubilee. Sweet, but with good acid to balance.
Among the new Vintage 2011 from the Symington’s, we tasted Warre’s, Dows, Cockburn, Graham’s, Graham’s The Stone Terraces, Quinta do Vesuvio and Quinta do Vesuvio Capela. A good flight among the many vintages declared from the already praised year. Warre’s was deep purple, with a lot of cherries and blackberries and ripe tannins. Graham’s more sweet, rich and fruity and very promising. Graham’s The Stone Terraces is made from two schist stone-terraced vineyards at Quinta dos Malvedos. The result is a rich, fruity, concentrated and vinous port, powerful and with some mint. Vesuvio was dark and very powerful too with both acid and strong tannins. You can find some of the same in Capela, but the addition of Sousão and a bit Alicante Bouschet makes it different to. More heavy and tight, but fresh at the same time, spicy and with pepper in a long finish. 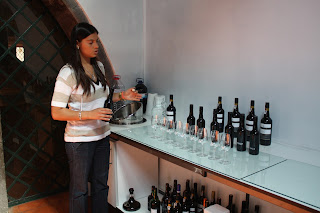 At Barão de Vilar Mariana Rocha Ferreira and Álvaro van Zeller served a broad range of their fine Colheitas – from 2005 and back to 1939. The highlights were: 1982, well balance with brown sugar, almonds and chocolate. 1962, powerful with a long tail full of pepper. 1963, dark and powerful with a lot of fruit and a splendid acid to make a great balance. 1934, surprisingly dark, a nice burned taste with some liquorice. The last two were poured directly from the cask. Barão de Vilar sure proved their quality, when it comes to Coheitas in the more Portuguese and rustic style compared to Graham’s. 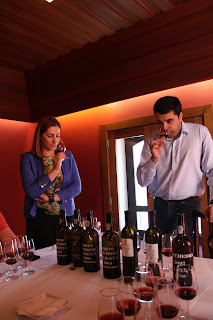 In Calem’s beautiful lodge Sónia Figueira and winemaker Carlos Alves from Sogevinus welcomed us with two flights from one of their minor brands Hutcheson – minor in quantity but not quality. And this time the vintages were served before the tawnies. Carlos explained that in his opinion it is easier to clean the mouth from the strong tannins with bread and water than to clean the nose after the Tawnies.
We had a LBV from 2003 followed by a young but promising Vintage 2003 and a Vintage 2000. The latter was drinkable already, more dry and with minerals, but with less tannins that the 2003. After that followed Colheita 2004, Colheita 2000, 20 years Tawny and Colheita 1984. The first a bit too young, 2000 very smooth with nuts and orange. The 20 years was sweeter that the Colheitas but very nice. The best glass sure was the 1984 with an impressive amount of acid to balance. 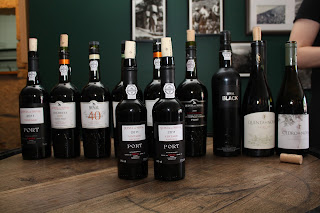 Noval does not have a lodge in Gaia - just a small store. Here we tried a couple of good and powerful table wines and then some port: Their reserve called Black and LBV 2007, followed by 10, 20 and 40 years Tawny and finally Noval Vintage 2011 and Noval Nacional Vintage 2011. Both the vintages were very rich and powerful. Noval had a lot of fruit, blackberries and pepper in the end. Nacional was nearly ink, a little shy in the nose, but so rich and intense that it nearly felt like an explosion in the mouth, sharp and with good acid.

Finally at Ramos Pinto Ana Rato presented both rubies and tawnies as well: LBV 2008 – one of the best LBV´s with a lot of power and juicy fruit, Single Quinta Vintage 2007 from Ervamoira and the vintage from the same year. The former more dry and spicy and with a lot of mint in the nose. The latter sweater, darker and with a more deep pallet. Then followed their range of aged Tawny, 10 years, 20 years and 30 years. They always impress me with their good balance between sweetness with almonds and freshness with acid, orange and acid. I range them among the best tawnies at all. 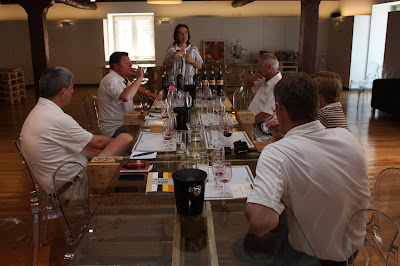 
A few days after the Enthronement Ceremony the Confraria de Vinho do Porto had their traditionally regatta in the Douro. The old Barcos Rabelos – the boats that used to sail the port pipes down to Vila Nova de Gaia from the Quintas in the Douro – were sailing from the mouth of the river to the finish line in front of the port lodges.


16 boats were participating this year. I was lucky to get invited by Ramos Pinto to be on board of Confrarias boat that followed the Rabelos during the race. Soon the Rabelos of Cockburn, Cálem, Offley and Taylor were in the lead, but at the goal “Quinta dos Canais” from Cockburn with Mestre Luís Martins as the captain was a clear winner, followed by “Quinta do Foz” from Sogevinus and Infanta D. Isabel from Rozès. 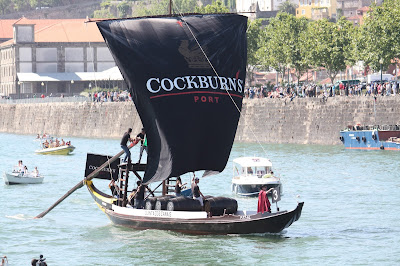 But as David Guimaraens from Fladgate explained me the regatta is more fun than a serious race. The same point was made by George Thomas David Sandeman, who after the regatta, where the boat from Sandeman fished last, said with a big smile: “Everyone can win, but it takes more effort to finish last. And remember, that it is told in the Bible that the last will be the first”.
Yes, it is a funny event. And it sure is a beautiful sight when the Rabelos are coming up the Douro with their sail raised. And I must admit that it was lovely to spend the afternoon at Confrarias boat with good serving and port tonics.
Ramos Pinto, who invited me on board, doesn’t have a boat in the race themselves. And as João Machete Pereira explained to me, it is too expensive to buy a new Barco Rabelo just for that event. 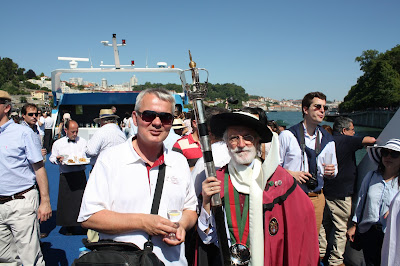 
In late June I visited Porto again. It is always nice to be back in the beautiful city, and it is always a pleasure to visit the port lodges for tastings and for meetings with old and new friends in the port business.
The main events during this visit were the celebration of São João – the main Saint of Porto - and the Enthronement Ceremony at the Confraria de Vinho do Porto. A friend of mine, the president of the board of The Vintage Port Club, was enthroned as Caveleiro and we were a small group that to took part of the event and the following dinner. A wonderful evening that gave me the chance to talk with people like David Guimaraens (Fladgate), João Nicolau de Almeida (Ramos Pinto), Gustavo Devesas (Symington), Miguel Roquette (Quinta do Crasto), Ana Rato (Ramos Pinto), Roy Hersh (For the Love of Port) and many more.
The days in Porto included a few visits and tastings as well. We started at the newly renovated lodge at Graham´s, where we a big tasting followed by a wonderful fresh tuna steak at the new Vinum Restaurant. The tuna, the wines and the view were all beautiful. The Symingtons have done at good job renovating the lodges and transforming it into at first class destination for wine tourist.
In the days to follow we visited Barão de Vilar, Sogevinus (at Cálems lodge), Noval and Ramos Pinto. A report of some of the wine tasted will follow. 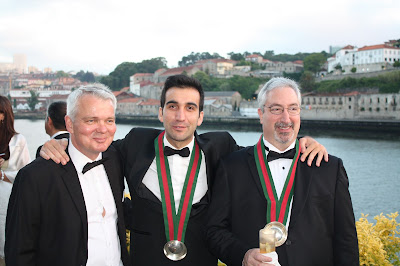 Together with other port lovers: Me, Gustavo Devesas and Roy Hersh from For the Love of Port
Indsendt af Bjarne Mouridsen kl. 07.46 Ingen kommentarer: