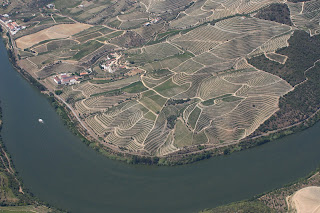 The Douro is slowly passing by Croft´s Quinta da Roêda just outside Pinhão. But it has not always been like that. Until the river was dammed the water was lower and caused rapids where it makes a bend. The sound or the noise from the river, the arrueda, gave name to the Quinta.
The Quinta was founded in 1811 and was owned by Taylor in many years. But when John Fladgate´s daughter married one of the representatives from Croft, the Quinta changed hands. When Fladgate Partnership bought Croft and Delaforce in 2001 Roêda returned to the old owners.
Recently The Vintage Port Club in Denmark hosted a Croft tasting of most of the declarations since 1955 – including two Single Quinta Vintages from Roêda. Normally at a vertical tasting like this we divide it into two sections (as far as I remember it was Dominic Symington who introduced us to this method) – first the oldest half of the wines beginning with the youngest, and secondly the youngest half beginning with the oldest. Tasting the wines in this order means that we don’t start with the oldest vintages, but we will taste them before the youngest wines, that are full of fresh fruit and tannins and can ruin the ability to taste the full pallet of the old and more fragile ones.
The first wine was the 1985, a year that has brought some very good wines, but unfortunately more disappointments. This evening Croft was among the latter. Already somewhere between red and mahogany with a light brim. A weak aroma with a bit cherries and alcohol, low acid and just a bit fruit left. The 1977 was slightly better without making any impression. Brown, a hidden aroma of strawberry and nuts, very light and some pepper in the tail. None of them seems to have a long life in front of them.
This was sort of expected. Croft did not have the best reputation in the 70ths and 80ths, where it seems like they focused more on quantity than quality. From now on the wines could only improve and they did! 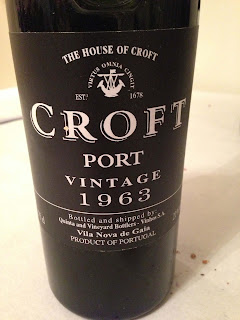 The next flight was two great Vintages, the 1970 and the 1966, followed by another two, the 1963 and the 1955. These wines were the peaks of the evening. 1970 was red brown, but still with fruit and acid for developing further. The nose was full of cherries and bit cinnamon and eucalyptus, fruit and well balanced with a nice tail. 1966 was the weakest of the four. Very light and tawny-like in the stile, some strawberries, raisins and a bit coffee. A lack of acid and a very short finish. Often 1966 has performed nearly as well as 1963, but not this evening. What the 1966 was short of was present in the 1963. A lot of power and fruit, mahogany and a good aroma of fruit and cherries. Still alive and kicking, elegant and well balanced and a long, pleasant tail. 1955 was a bit darker, but not as pleasant and comfortable in the nose. Cherries and a bit sharp at first, but a lot better after a while. It just needed some time.
The second section of the tasting started with Quinta da Roêda 1987 and 1995. 1987 was red brown with marmalade and pine needles in the nose. Nice and drinkable right now, but without depths and a broad pallet. 1995 was dark red and had a lot of fruit and tannins left. I think it will approve.
After that we ended with Croft 1991, 1994, 2000, 2003 and finally 2007. Now there was a lot of dark colour and fruit in the glasses, the last ones inky.The more light and perhaps more elegant style with cherries gave room for more powerful and muscular wines with darker berries, plums some coffee and tobacco and perhaps a bit pine needle. In generally they were a bit sweeter, deeper and with a burning tail. 1991 did not have that much depth and power, but a lot of fruit. 1994 was a bit closed right now. Unfortunately the 2003 I tasted was corked, but the report from the other end of the table was, that it was very good and promising. 2007 showed a lot of potential too.
My conclusion is that Croft in older vintages is very good, and that the quality is rising again, but in a bit more sweet and concentrated style. The head winemaker now is Taylor and Fonsecas David Guimaraens, who wisely has chosen to give the brand its own style. One of the first things the new owners did was to reinstall the old lagares at Quinta da Roêda – a fine symbol of the intentions to produce port of high quality.
After the tasting the participants voted for the best wines of the evening. A couple of corked and odd bottles disturbed a bit, but there was no doubt about the first place:


Recently a friend invited me to a small tasting of basic Niepoort. First the entry level with Ruby and the Tawny, then Ruby Dum and Tawny Dee and finally LBV 2007, Colheita 2001 and 10 years Tawny.
A tasting like that gives you the chance to compare the style in different levels of quality. And through I am used to drink older vintage, I do enjoy a good glass of reserve port now and then. 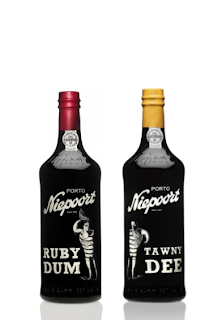 I was surprised how smooth the Rubies were. Easy going with dark berries and nice fruit, and even the LBV did not have strong tannins. The Two Twins from NiePOoRTland are referring to the twins from Alice in Wonderland, Tweedledum and Tweedledee. The first still youthful with red cherries and some plums – the latter aged 3½ years in oak and with notes of dried figs and a long finish with pepper and spirit. They both had a little sign attached around the neck saying Drink Me! And that is what they are made for. Easy to drink – perhaps for a new audience – but without the depth, power and concentration of their older sisters and brothers. Of course the LBV had more to offer, more fruit and a brother pallet, but I was not that impressed. Normally it performs better.
The best wines of the evening were the two Tawnies with age. The 10 years had figs and nuts but also some notes of lemon and orange, followed by a long, comfortable tail. For me the port of the evening was the Colheita 2001. Medium red to light brown. Dried fruits with some orange and apricot in the nose. Still young, but with power, good fruit and intensity. Balanced and nice to drink.
Besides the wines from Niepoort, we had a Don Joaquim Vintage 1989 – a label that I have never tasted before and to be honest know nothing about. It was ready to drink and close to be gone. A brown and bright colour, a bit milky in the nose, smooth but without depths and a very short finish. Not a great port, but as an introduction to aged vintages it served its duty that evening. The only notes I have been able to find are on the Swedish site vintageport.se. If anyone knows more, you are welcome to send me information…
A nice evening, but I am looking forward to taste Niepoort Vintages and older Colheitas in the future.
Indsendt af Bjarne Mouridsen kl. 04.37 Ingen kommentarer:


Most Wine Shops are offering small tastings every month or occasionally. Living in the centre of the Town with several good Wine Shops around me, I am attending some of them. Normally it is possible to taste five or six wines – enough to get an impression of a region or the wines on sale. And something you can do on your way home after work.
One of the places is a small importer of Italian Wine, called Vinotek A Fynnis, which I recently started to visit. The name is a sort of mixture between Danish and Italian and means something like the Enoteca on Funen, the name of the region. The place opened back in 2000 as the result of the owner’s passion for good Italian wine – the same story which is behind many other small Wine Shops and importers.
Last Month Vinotek A Fynnis focused on wines from Piemonte including a very tasty Aperture Pinot Nero from Colombo, well balanced and comparable with wines from Burgundy. Some days ago they presented five wines from Tuscany, mainly based on Sangiovese of course.
The first wine was a plain Chianti Classico 2008 from the young estate Castelo di Radda. Cherries hidden in the nose and a dry tail with tannins. It was followed by a more powerful Chianti Colli Fiorentini 2009 called “La Torretta” from La Qeurce, a small estate just south of Florence. More expressive, ripe cherries and a lot of fruit, soft notes from 14 months in barriques and very well balanced. A wine, that gives value for money.
Another great wine was the Poliziano, a Vino Nobile di Montepulciano 2007, which had a hint of oak in the nose and acid to balance the plummy fruit. A really nice glass - powerful, but elegant and with a broader palet. Looking forward to try it with a good meal.
The last two wines were both from 2009 and both based on 100 % Sangiovese. First a Montecucco Sangiovese form Salustri and then Morelliono di Scansano 2009 from Colle Spinello. Both with harder tannins.